The Mater Boni Consilii Institute opened in Orio Canavese, in the Ivrea Diocese, in January 1987 and was moved to Verrua Savoia in the Casale Monferrato diocese near Turin in 1988, where it continues to train clergy for the priesthood.

The Seminary and the Church (doctrinal position, canonical situation) 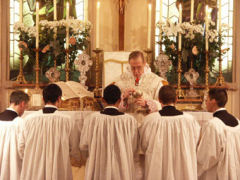 The St Peter Martyr Seminary aims to prepare candidates for the Catholic priesthood by strictly observing the rules of the Roman Catholic Church. The Church alone can found seminaries (can. 1352) and these are approved and overseen by a bishop or the Holy See (can. 1357, 3 and 4). Thus, while awaiting the canonical agreement of the seminary and approval of its rules, the San Pietro Martire Seminary is not a legal reality, but a purely factual one. However, as the training of the clergy is of vital importance for the continuation of the Mission entrusted to us from our Lord Jesus Christ, we believe that while this state of privation of the Church’s authority lasts, it is our right and duty to prepare as many as are called by God to the priesthood. On account of what was mentioned above, the sole moral justification for the existence of our seminary, without canon approval, is the present situation of the Catholic Church as described by Monsignor M.L. Guerard des Lauriers in his Cassiciacum thesis. The superiors, teachers and students of the seminary must adhere to this belief.

The vocation to the priesthood 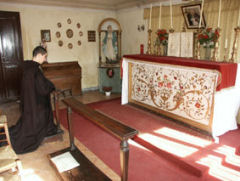 One cannot aspire to the priesthood if one has not received a vocation or a calling from God ‘Neither doth any man take the honour to himself, but he that is called by God, as Aaron was’ (Heb, 5,4,); it is ‘You have not chosen me: but I have chosen you; and have appointed you, that you should go, and should bring forth fruit’ (Jo, 15,16); ‘All men take not this word, but they to whom it is given’ (Mt. 19. 11). God will never fail to kindle vocations to the priesthood because these are indispensable to the very existence of His Church. Extraordinary or miraculous calls, like that of St. Paul, are exceptionally rare; instead, God usually manifests his choice through simpler means. In particular, Divine Providence will

Admission to the Seminary 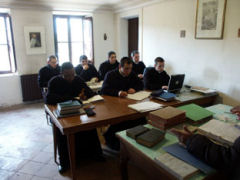 Anyone who wishes to join the seminary should write to the Rector: Rettore del Seminario, Seminario San Pietro Martire (Località Carbignano 35/36, 10020 Verrua Savoia (To), Italy), specifying reasons which lead them to desire the priesthood.
The following should be attached to the letter: 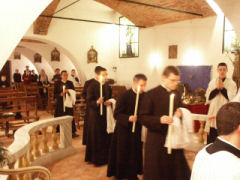 The application form will be reviewed by the Rector who will decide whether the candidate meets the requirements of the Church, particularly in the canons 1363,1364 of the Code of Canon Law (promulgated by Benedict XV). The candidate – of whatever nationality – must be between the ages of 17 and 40. He may apply for admission to the Istituto Mater Boni Consilii; however, ‘candidates who are not intending to become part of the Istituto Mater Boni Consilii may be admitted by previous arrangement with their institute or sacerdotal group or upon recommendation by a trusted priest’, bearing in mind what has been stated above on the doctrinal position of the seminary.

The academic year begins on the Feast day of Our Lady of Sorrows (September 15th) and finishes at the end of June; the exams are scheduled in February and June. The course lasts six years: two of scholastic philosophy, and four of theology. For both disciplines, the Doctor Communis St Thomas Aquinas’ doctrine will be followed (can 1366). Lessons will be held in Italian and French, while the manuals and texts are in Latin; where required, catch-up sessions in Latin will be provided.

Holy Mass and divine office are celebrated exclusively in Latin and conform to the rubrics promulgated by St. Pius X. From the moment of taking the habit, clerics must always wear the ecclesiastical robes (priest’s cassock). 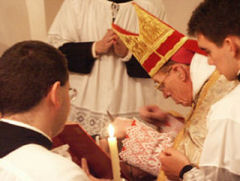 During the course of their studies and with the agreement of their spiritual director and the approval of the Rector, seminarians who apply will receive the Sacred Orders laid down by the Council of Trent: the tonsure, the four minor orders, the sub-diaconate (which implies the obligation of celibacy), the diaconate and the priesthood. The Sacred Orders at the Mater Boni Consilii Institute are usually administered by Monsignor Geert Stuyver, who was consecrated bishop by Monsignor Robert Fidelis McKenna, a Dominican, who in turn was consecrated by the Dominican theologist Monsignor Michel-Louis Guerard des Lauriers. Padre Guerard des Lauriers received the Episcopal consecration in 1981 from Monsignor Pierre-Martin Ngo-dinh-Thuc, who was Archbishop of Hue, in Vietnam, and Assistant to the Papal Throne. For the legitimacy of these consecrations, which can be justified only by the present situation of the Church (the Apostolic See is officially vacant), Don Ricossa’s booklet on the Episcopal consecrations can be consulted and is on sale at the Centro Librario Sodalitium. 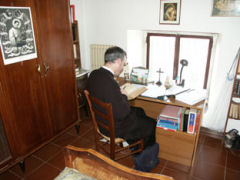 Our Lord Jesus Christ entrusted the celebration of the Sacrifice of the Mass to priests, the bloodless renewal of Calvary, the only sacrifice of the New Testament that gives God the glory He deserves. He also entrusted priests with the administration of the sacraments, channels of grace and privileged instruments for the salvation of souls.

Young people who have the physical, intellectual and moral qualities for the priesthood might ask themselves if, by any chance, Jesus Christ isn’t also saying the words ‘come and follow me’ to them. The Spiritual Exercises of St. Ignatius are a wonderful and recommended way to examine one’s vocation closely. In these particularly difficult times, zealous, willing, holy priests are even more necessary than in the past for the salvation of souls. Why should it be others and couldn’t it be me who answers Jesus Christ’s call?

Sites in other languages: