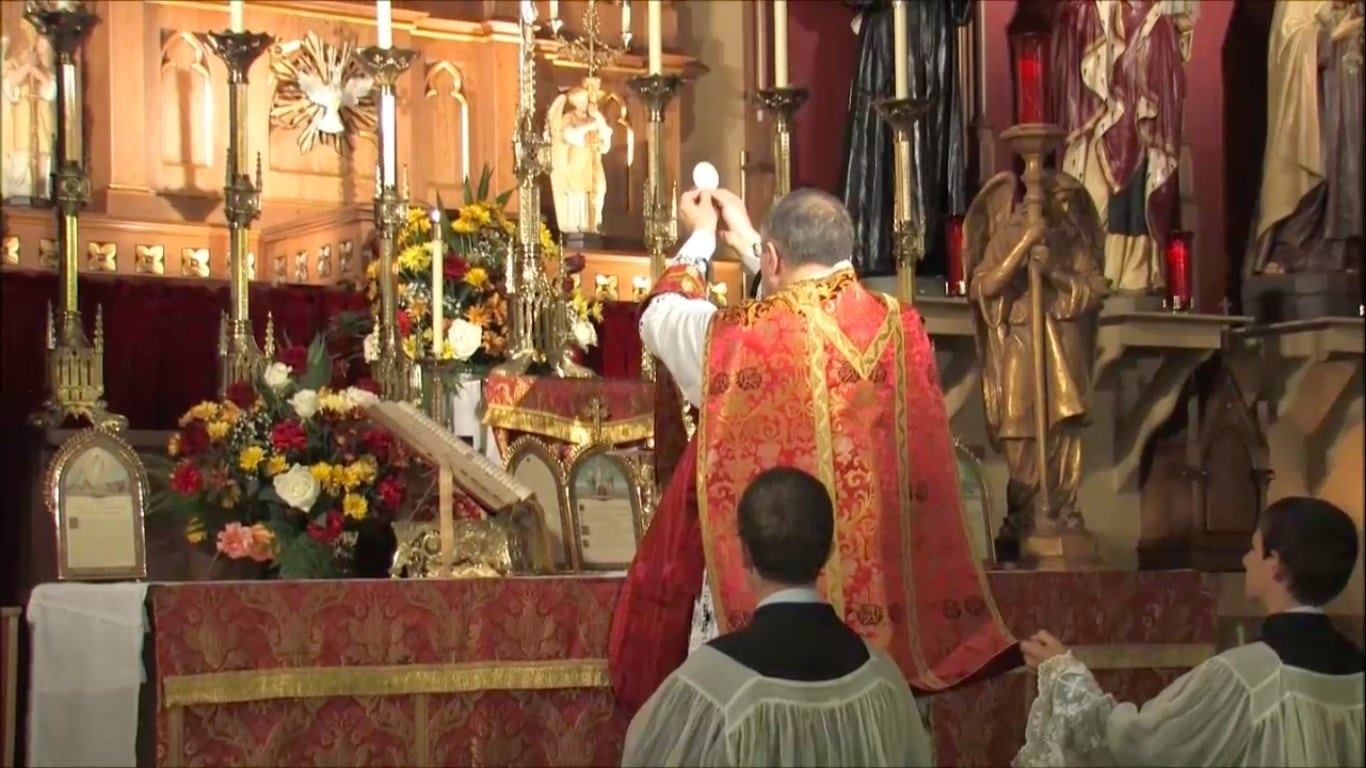 The 11th of September 2020 marked the passing away of Fr Anthony Cekada, whom the Traditionalist Catholic world in Italy had the opportunity to know thanks to the Mater Boni Consilii Institute and its publication of two books and some articles written by the same Fr Cekada.

Everyone who knew him and even those who did not, both the friends and acquaintances, have already had occasion to eulogize him as a man, a priest and a liturgist and thus his biography, which Fr Cekada himself partly reported in the preface to his last book, “Work of Human Hands”, has become well-known.

Born in La Jolla (California) on 18 July 1951, at a very young age Anthony Cekada was admitted to the Minor Seminary in Milkwaukee (Wisconsin), where he also  attended the local Conservatory. In Milwaukee he  continued his studies at St. Francis Seminary before joining the Cistercian Order first in the United States and then in Hauterive (Switzerland); he was constantly looking for a more Traditional liturgy and unchanging doctrine. In 1975 he entered the Seminary of Ecône, where he was ordained a priest by Archbishop Lefebvre on 29 June 1977. After returning to the USA, Fr Cekada taught in the Seminary of Armada (Michigan) and then in that of Ridgefield (Connecticut), while living from 1979 to 1989 at Oyster Bay Cove, New York, and working on The Roman Catholic magazine.

In 1983, along with other eight priests, Fr Cekada left the SSPX, and in 1989 he moved to the Church of St Gertrude The Great in West Chester, (Ohio) where he died after collaborating with Mgr. Dolan and, at the same time, teaching at Most Holy Trinity Seminary, directed by Bishop Sanborn, first in Michigan and then in Brooksville (Florida).

To these facts, which are already well-known, I would like to add some personal memories.

I met Fr Cekada in January 1977, while paying a visit to the Seminary of Archbishop Lefebvre. Fr Cekada was attending his final year and everyone talked about his kind and l humorous style. It is because of this that I met and noticed him during that short stay, despite our age difference. I entered the Seminary in October 1977, so I did not know Fr Cekada who, in the meantime, had been ordained in June. It occurred to see him when he came to Ecône. Many seminarians, along with me, looked with sympathy, while others with hostility, to the brothers of the American district. It was known that it was because of them that Archbishop Lefebvre had abandoned the first liturgical reforms of Paul VI, initially followed in the Seminary, and it was also known that the district of the United States, along with England and Germany, did not followed the rubrics of John XXIII, as in Ecône, but those of Saint Pius X.

An issue of The Roman Catholic regarding the invalidity of the new rite of priestly ordination set fire to the dust in the Seminary of Ecône, since in 1981 they still taught that it was permissible to attend the new Mass! It was then decided to “normalize” the North American district, at least that directed by Clarence Kelly, and the Ridgefield Seminary, directed by Fr Sanborn, through the imposition of the Roncallian liturgy and the related mindset on the whole SSPX. In Ecône a diurnal was then printed according to the reformed Rubrics in order to be imposed in all SSPX houses and seminaries, and Fr Williamson, who as a professor at the Ecône Seminary took a stand against everyone because of his opposition to assisting the Novus Ordo liturgy (or quam mutatus es ab illo!), was sent to the American seminary to impose the reformed liturgy, normalize the whole district and suppress every resistance.

What was committed to Fr Williamson was accomplished very well in a short time, and the “nine bad priests”, as they were dubbed, were forced to leave the SSPX in 1983. In this way, the catastrophic destruction of the SSPX districts by the new superior, Fr Schmidberger, began, and, after the United States of America, it was the turn of Italy and then Latin America.

The rupture was not caused by the question of recognizing the authority of John Paul II, since ‘sedevacantism’ had been officially outlawed in Ecône since 1979, but the American priests solved the issue by means of a secret agreement signed with Archbishop Lefebvre, according to which they were authorized to avoid mentioning the ‘Pope’ in the Canon of the Mass under the condition of not publicly speaking about the question.

The reasons for the rupture were disciplinary and pastoral, such as the adoption of the liturgical rubrics issued by John XXIII, the collaboration with priests ordained according to the new rite of Paul VI, the recognition of marriage annulments pronounced by the modernists: all these things were utterly rejected by the American priests. Many of them, including Fr Cekada, had spent very little time at Ecône Seminary where, at its beginnings, very different opinions were admitted; moreover, the priests had not been trained, as it happened later, in the mold of the so-called “spirit of the Fraternity”. As a consequence of these facts, their attempt to preserve the houses in which they resided, which caused lawsuits, was considered as a theft by the SSPX in Europe, and the American priests were demonized and labelled as ‘bad priests’. To exemplify this situation, when Dom Gérard came to a break with Archbishop Lefebvre, this latter encouraged the Benedictines in Brazil to keep their monastery with paying obedience to their former superior – evidently, the VII commandment was applied differently in Brazil and in the United States! -. Anthony Cekada wrote an article in which he describes those events in detail, and commented: “Non, je ne regrette rien!”.

A second meeting with the American brothers and, therefore, also with Fr Cekada, occurred after our leaving the SSPX in December 1985. Fr Sanborn, along with others, came to visit us in Nichelino since we had a common problem, represented by the Bishop and the Seminary. The IMBC which, at that time, was taking the first steps, played an important role towards our American brothers as far as our position since September 1986 was concerned, that is, acceptance of the Cassiciacum Thesis and of the episcopal consecrations without any mandate, at least that of Fr M.-L. Guérard des Lauriers. These two topics spread a division among the American priests who, conversely to us, did not remain in union in only one Institute but established a mutual collaboration while keeping their own autonomy. The majority of the priests, including Fr Cekada, accepted the episcopal consecrations, following in this way the advice provided even by Mgr. De Castro Mayer; the remaining others, lead by Fr Kelly, refused the episcopal consecrations and, later, accepted another consecrator.

In regard to the question of authority, it became a necessary and no longer questionable point, even though some of the priests, such as Fr Cekada, adhered to the sedevacantism ‘simpliciter’, and others, such as Mons. Sanborn, followed the Thesis. This difference did not represent a reason for a division – Americans tend to be more pragmatic than us!

Anyway, the IMBC has constantly kept excellent and friendly relations with Fr Cekada of whom, as previously mentioned, has distributed books printed by the CLS, like “Problems with the Prayers of the Modern Mass” and “Work of Human Hands”, and published articles in Sodalitium, especially especially the so-called ‘traditionalist myths”, i.e., the many false arguments used by Traditionalists to support their own particular stances. The IMBC, however, avoided the distribution and publication of books and articles regarding the sedevacantist ‘simpliciter’ position.

During the controversy over the invalidity of the new ordination rites, Virgo Maria’s team tried to enlist Don Cekada, at least his name, in the campaign of denigration and slander against the IMBC as it is used to be done by those people (this campaign continues under other names). It was in that circumstance that Don Cekada courageously showed himself to be our true friend, writing as follows to Virgo Maria, the very day of their last attack: “Dear Sirs, the statements contained in your last e-mail (issued on 26th September 2009, note by Sodalitium) are, in my opinion, absolutely meaningless. Please, stop disseminating them. I refuse to be associated with your campaign. I hold Don Ricossa and the priests of the IMBC in high esteem. In Christ, Don Cekada ”. (see Sodalitium, n. 64, May 2010, pp. 54-55; French edition, July 2010, n. 63, p. 64).  Virgo Maria, of course, did not publish the letter sent by Fr. Cekada, who then authorized us to make it known through a letter issued on 30th September 2009. The sequence of events is fully illustrated on the French page of our website at this address: https://www.sodalitium.eu/labbe-anthony-cekada-soppose-publiquement-a-la-campagne-dun-site-internet-contre-labbe-ricossa/

Fr Cekada paid a visit to us in Verrua on 18 and 19 October 1993, when, on the occasion of the spiritual exercises for priests preached by Father Barbara, a meeting was held between thirteen (13) priests who were guests of our Institute. The friendship with Fr Cekada then went ahead in spite of the geographical distance, as it is proved by the huge correspondence exchanged so far, for many years.

To him who proved to be our friend in time of trial we now express our gratitude, our friendship and our prayer, while looking for the final Resurrection.